Social networking may have started out as a way for students to keep track of their friends, but it has expanded in just about every direction. These days, you can find at least one related social networking site on just about any general topic, including music, photography, television, books, shopping, and bookmarking. But it isn’t all fun games. Job sites like Monster and LinkedIn began the evolution from social networking to professional networking, and academia has joined the fray as a number of networking sites specifically for academics have popped up in recent years. Now we can add “research” to the list above.

The impetus for this blog post was an email that has been making the rounds, originating from Dr. Richard Price of Oxford University, that reads as follows:

I recently finished my Ph.D on the philosophy of perception from Oxford. With a team of people from Stanford and Cambridge, I’ve just launched a website, www.academia.edu, which does two things:

– It shows academics around the world structured in a ‘tree’ format, displayed according to their departmental and institutional affiliations.
– It enables academics to see news on the latest research in their area – the latest people, papers and talks.

We are hoping that Academia.edu will eventually list every academic in the world — Faculty Members, Post-Docs, Graduate Students, and Independent Researchers. Academics can add their departments, and themselves, to the tree by clicking on the boxes.

The message concludes with the names of a few notables who have joined (or been added) to the site, and a request to assist Dr. Price and friends in their efforts by further circulating the announcement.

Call me a sucker, but I got that message and immediately joined up, forwarded it to my colleagues, and started envisioning the possibilities. What intrigues me is Academia.edu’s combination of a professional networking site with a digital repository. Could this take the place of our nascent institutional repository or save my fellow librarians from having to put together an institutional bibliography each year? 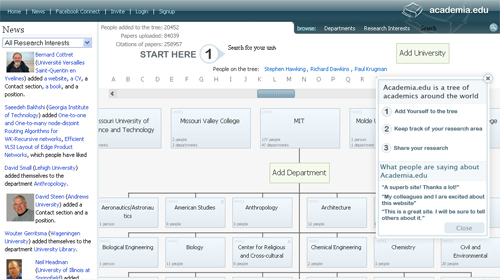 A screen shot of Academia.edu’s homepage.

The networking-repository hybrid model was new to me, though I learned later that Academia.edu is not the first to do this. Nor is it the only virtual platform where researchers can create a profile and search for others with similar research interests. A lot of people in academia already use Facebook and LinkedIn to connect with their colleagues and friends, but Academia.edu and its competitors are different because they were specifically created to serve the needs of academics, in terms of research, professional networking, listing citations, and file sharing. Try some of those activities on Facebook, and you’ll soon agree that it falls far short of an academic’s networking needs.

Here’s an overview of the major academic networking sites and their features (if you know of others I overlooked, please comment below). All allow you to create a profile and search for other academics by research interest, so I’ve omitted those features in the table. 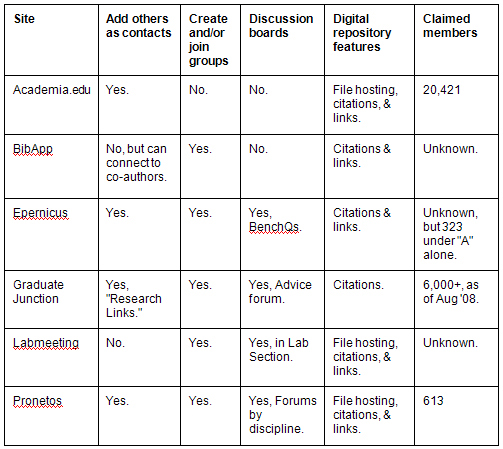 In addition to the characteristics above, these are the qualities that make each site unique.

I’m going to use the remainder of this post to critically review these academic networking sites, looking at the benefits, limitations, and possible future outlook.

There are two major benefits offered by participation in most of the sites I’m looked at, especially Academia.edu and Pronetos:

As far as #1, the networking aspect goes, it would be natural to ask why any of these sites are an improvement over the ubiquitous Facebook. Who needs another social network, for goodness sake? Vivek Murthy, one of the founders of Epernicus, addressed the question in a post on the Epernicus blog: “Mikhail and I started Epernicus because we realized that the social networks to which we belonged weren’t able to serve our needs as scientists. The profiles didn’t capture what was important to scientists. And equally as important, we couldn’t use these networks to help us find expertise in real world scientific networks.” If they had a question or issue unique to their research that no one they knew personally could address, they wanted a way to find others out there who might know more. This is not what Facebook was built for.

In theory, the opportunity to share research interests and connect with other scholars sounds idyllic. Finally, the chance to find out who’s walking the same path and reading the same articles. It’s like eHarmony for the brain instead of the heart. If there is a need and a demand for such a thing, it could really take off.

Personally, I get more excited about #2, the digital repository side of this project. The sites that actually host files, especially Academia.edu and Pronetos, are contributing to the open access movement in ways they may not even realize. Although those of us in libraries already know that faculty usually don’t want to take the additional time to post their papers to our repositories, these two sites could be different because (a) they’re easier to use than any library repository I’ve ever seen, (b) they’re prettier, and (c) they make it clear that the papers uploaded will be shared with others instead of stored in a dusty server room, never to be heard from again.

First, any social networking site, whether personal or professional, is only as good as its membership. With that in mind, I would say that all of these sites have a long way to go in soliciting members. Academia.edu appears to be the largest, at about 20,000, but this is still a small percentage of academics worldwide. GraduateJunction may have the greatest potential in this arena due to its specific target audience (graduate students) and the fact that it boasts more “useful” (job and conference) features than the other sites in this review.

Second, although I initially found it entertaining to search for others with similar research interests to mine, once I found a few I realized that I just didn’t know what to do with them. I could add them as contacts and review their publications. What then? If I were extremely motivated perhaps I would email them and say a few words in our unique research interest language (“speaking geek,” I think they call it). But how often would such contact lead to something constructive? The more I searched, the more skeptical I became.

Third, academic networking sites are facing big challenges in finding an effective way to ensure that only legitimate academics participate. The UK Times Higher Education expressed concern about Academia.edu because “anyone can pass themselves off as an academic…and scholars could be misled into putting their details on it because it occupies the generic top-level domain ‘.edu,’ which is normally reserved for universities.” On the other hand, some sites are so careful to screen members that they seem almost impossible to join. Despite repeated attempts, I was unable to join Labmeeting or Pronetos due to their screening standards. Pronetos sent me an activation message that somehow disappeared into cyberspace (and no, it wasn’t in my spam folder), while Labmeeting did not recognize my university email address as being from a legitimate academic domain (my university president would take issue with that!).

All in all, social networks of any variety are a curious tradeoff. How much time are you willing to put into them in order to expand your web of connections? In writing this blog post, I spent 8-10 hours crawling around on the various sites mentioned here, creating profiles, exploring group and research interests, checking to see if I knew anyone (or wanted to know anyone) on any of the sites. I found many of the sites appealing at first, and enjoyed some of my wanderings. But now that I’ve had some exposure to these platforms, returning to Facebook feels kind of like going home. True, I can’t search for other scholars based on my research interests. But considering how many other avenues I have to find them — from publications to blogs to conferences — do I really need a new one?

As Jeffrey R. Young noted in “New Social Network Hopes to Catalog All Researchers and Their Interests,”an article in the September 16 issue of the Chronicle of Higher Education, “It’s too soon to tell whether any of these sites will catch on, and it seems that the services will only become valuable if a critical mass of researchers join in. The final winner may be Facebook itself.” So, are these new-kid-on-the-block academic networking sites worth your time? Based upon my admittedly limited experience on these sites, probably not. But if you have some free time, go for it. Create your profile and see who else is out there. You might get lucky.

Many thanks to Brett Bonfield and Ellie Dworak for taking the time to offer feedback on the draft of this post, and to Brett for his coding kindnesses.