As a teenager, I never tried drugs because I didn’t like the idea of any substance affecting the processes of my brain. It never occurred to me that the long hours I spend working, reading, and researching in front of a computer could have a similar effect. 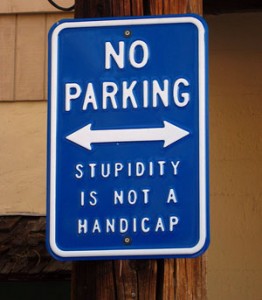 Recently I found out that it could be happening to all of us: Google and the Internet as a medium could indeed be changing the ways our brains function and process information. “As Marshall McLuhan pointed out in the 1960s,” writes Nicholas Carr in The Atlantic, “media are not just passive channels of information. They supply the stuff of thought, but they also shape the process of thought. And what the Net seems to be doing is chipping away at my capacity for concentration and contemplation.” Carr’s article in the July/August issue of The Atlantic, “Is Google Making Us Stupid?,” received some attention for accusing its readers of not being able to accomplish deep, sustained reading in the age of the Internet. According to the article, the Web is reprogramming our brains in a fundamental, biological way. (Note: for a smart, satirical look at the issue, check out Stephen Colbert’s interview with Carr).

The responses to Carr’s article came from both sides of the fence: those who agreed with with him and those who objected to the perceived insult to their intelligence. The Chronicle of Higher Education came out with three articles that expressed concern and agreement: “Your Brain on Google,” a compilation of somewhat ironic quotes from the Web, “On Stupidity,” an extended book review of “a cartload” of recent books on anti-intellectualism, and “On Stupidity, Part 2,” an English professor’s response to the problem. Meanwhile, The New York Times Technology section printed a counterpoint by Damon Darlin, “Technology Doesn’t Dumb Us Down. It Frees Our Minds,” that accused Carr of being a technophobe and insisted that “writing, printing, computing and Googling have only made it easier to think and communicate.”

The irony of the entire argument is encapsulated in the first two lines of the New York Times article: “Everyone has been talking about an article in The Atlantic magazine called ‘Is Google Making Us Stupid?’ Some subset of that group has actually read the 4,175-word article.” Darlin builds the satire by attempting to sum up Carr’s article in a Twitter “tweet” of less than 140 characters, but only skims the surface of the real irony: the likely truth that very few of the people discussing Carr’s article had been able to read the whole thing. There’s something amazing and a bit disturbing about a culture in which everyone’s opinion is equally important and valid, no matter whether or not one has even a basic knowledge of the subject.

As an academic librarian, I’m particularly interested in the implications for libraries of Carr’s article. Hand in hand with Carr’s concern about a growing inability to engage in deep reading is the equal possibility of a growing inability to engage in sustained research. Google leads us to believe that searching for information is easy when library research is complex, often frustrating, and full of twists and turns. So the next question is: does it have to be that way? It’s a given that library systems tend to be overly complicated, even for simple searches. The common refrain is: how can we be more like Google?

The followup question is: do we want to?

These days academic libraries are grasping at every possible product—from federated searching to LibraryThing—that might ease our students’ apparent impatience with the challenges of research. After all, the 2002 Pew Internet & American Life report, “The Internet Goes to College,” made it clear that our students rely on the Web first when they’re doing research, and generally use the library only as a latter resort. If academic libraries don’t make it easier for students to find relevant information for their course projects, they may not come at all. We may as well just hand Google Scholar the keys.

On the other hand, a recent study of the research practices of college students in the humanities and social sciences offered more heartening results. Alison J. Head’s article, “Beyond Google” in First Monday (later written up for September 2008’s College & Research Libraries) found that students are using libraries in greater numbers—and earlier in their searches—than the Pew Research Center would have us believe. Granted this was a study at a single, small, liberal arts college that doesn’t necessarily reflect the situation everywhere. But we can glean some optimism from the study, along with the requisite grain of salt.

On the positive side, academic libraries have the benefit of a captive audience of students whose professors often require the use of library resources. While we may hope that these requirements train students in the ways of deep research, the day-to-day interactions at any academic reference desk would indicate otherwise. Instead, a majority of students reflect a desire to find adequate sources for a given project as soon as possible, even if those sources are not ideal. Is it Google that has raised their expectations for how quickly an information search can be accomplished? A study from the British Library calls this a “truism in the age in which we live” that “crosses all generational boundaries in the digital environment…. The speed of new media has cultivated a lowered tolerance for delay.” The study goes on to say:

There is considerable evidence to support the view that many students do not explore information in any deep or reflective manner. The lack of any evaluative efforts on the part of information users has been documented…. According to Levin and Arafeh (2002) most students stop searching at ‘good enough’ rather than trying to find the best source etc. Some ‘view the Internet as a way to complete their schoolwork as quickly and painlessly as possible, with minimal effort and minimal engagement.’

Essentially I see students having difficulty following or making extended analytical arguments. In particular, they tend to use easily obtained, superficial, and unreliable online sources as a way of satisfying minimal requirements for citations rather than seeking more authoritative sources in the library and online. Without much evidence at their disposal, they tend to fall back on their feelings, which are personal and, they think, beyond questioning.

The echo of Carr’s article in both of these quotes is unmistakable. Whether or not Google is actually changing the biology of our brains it is difficult to say, but it does seem possible that Google could be damaging our students’ ability or inclination to conduct real research.

I’m not blaming our students. It is not the fault of anyone in particular if they are losing the interest and ability to conduct complex research. They are products of their culture, just as we all are. Just as I am.

In fact, those of us currently in our early to mid-thirties are in a unique position to address this issue. You see, I didn’t grow up with computers, but computers and I grew up together. I can remember, back in grade school, Atari and I bumbling our way through Asteroids. In high school, America Online and I had our first heady experiences in online chat rooms. When I went to college my library’s young OPAC was incomplete and I still had to use the card catalog to find certain items. Computers were leaking into my research in college, but their effect was fragmented. Google was founded the year I graduated from college.

I grew up with computers, but I grew up knowing that they were fickle, fallible, and constantly changing. I still have a collection of old floppy disks with files I will never be able to access again. I greatly enjoy technology, but I maintain a certain skepticism about it.

That said, I had to make a conscious effort to read Nicholas Carr’s article all the way through. The first time I linked to it, I skimmed the first few paragraphs and bookmarked it. The second time, I skimmed further into the text. I didn’t actually read the whole thing until I chuckled at Darlin’s observation on how few had read it and realized that I was not one of them.

What happens to our libraries in a culture where sustained reading and deep research are skills that our students and patrons increasingly do not value? There is no easy answer, but the most critical thing we can do is reflect passion for our work and share it with our students. Benton writes, “Effective teaching requires embodying the joy of learning — particularly through lectures and spirited discussions — that made us become professors in the first place. It’s extremely hard, but teachers have been doing it for generations.”

Notice his admission that playing such a role is “extremely hard”; we can all appreciate his honesty there. It is hard to be an intellectual in a culture that values actors over educators. It is hard to face a constant onslaught of superficial research when we know how much richer and more inspiring information can be. But the payoff comes when we open the door and a student steps through, leaving Google aside for the moment, to consider the wealth of research tools at their disposal that they never knew existed.

If only it happened more often.

It’s your turn: Do you think Google is affecting us? Click here to take a short reader survey.

Many thanks to my ITLWTLP colleagues Derik and Brett, and to Rick Stoddart, Tom Hillard, Ellie Dworak, and Elaine Watson for offering feedback that helped shape this post.