Earlier this month, I presented at a one-day conference. Everything happened ordinarily. My submission of an abstract was accepted and I was scheduled in a session with two other presenters. Preparing for the presentation, I worked up my outline, gathered images, and put my slides together. The night before, I practiced my session by making a recording on my Mac. On the day of the conference, I was delayed and showed up late, so I missed the first presenters, arriving in time for the last part of the beginning session. Following that, I participated in a round table discussion. I grabbed a drink and a quick snack during the break and chatted with one of the other presenters as I set up my slides.

My presentation went well. It was not without some technical difficulties that forced me to cut my talk a little short, but I’m satisfied with how it went. The organizers tell me it was well received. I joined the audience to listen to the two presenters who followed me in the session. Later there was more chatting and another session. I had to leave early, so I missed some of the last presenters.

All in all it was a interesting day and a novel experience. You see, I was presenting at Met@Morph, the first annual Web Comics Comic-Con and Conference and it was held in Second Life–my first conference presentation in a virtual world. 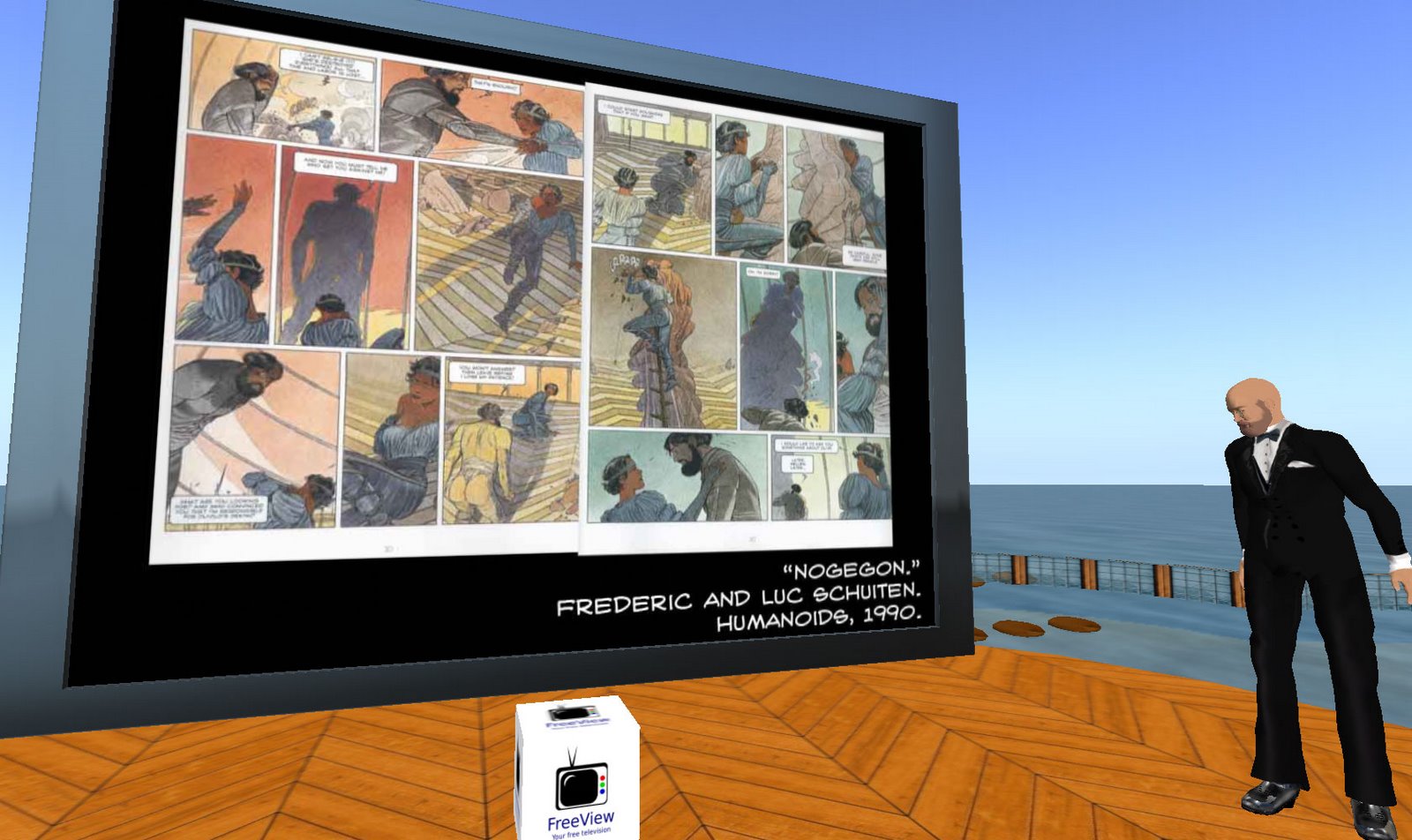 I tend to stay on top of the latest tech trends, but I’d been avoiding Second Life. I’m not interested in having another life, I’m happy with my first life, and I got my fill of avatars in all the years I played role-playing games (the ones with paper and dice). My impressions of Second Life have been so colored by the use of it as an alternate world/life that I neglected its use as a social communication tool. This experience convinced me of the potential for virtual worlds as virtual conference sites.

With the economy tanking and travel prices increasing (I don’t want to think about how much it’s costing to get me across the country to ACRL in March), large national conferences become ever more problematic for a larger number of librarians. There has always been a (perhaps large) group of librarians who have neither the personal nor institutional funding to attend conferences, a group which has been mostly shut out of ALA (see Emily’s post).

Why do people go to conferences anyway? Anecdotally, the majority of librarian attendees go for: a) continuing education/keeping up, b) socializing/networking, c) presenting and sharing information and experiences, and d) committee work and other activities involved in making the content of the traditional conference that offer an opportunity to pad the resume. I’ll leave off: e) free stuff, though a perk, I doubt that is a main draw (I did enjoy my free trip to a game at Dodgers Stadium while at Annual this year (Thanks, EEBO)).

All of the aforementioned reasons can be replicated (with different levels of success) in other contexts. I’ll focus on two models, the virtual conference and the unconference, specifically considering reasons a, b, and c above.

Most virtual continuing education opportunities have, more recently, stuck to the webinar model. A presenter uses audio over slides to offer his or her information to a group of users watching from their computers. Typically, the presenter’s talk is supplemented by a chat channel where users can comment and ask questions. Attendees log in, the presenter speaks, questions are taken, and attendees log out. While this model can be effective for conveying information, it is not any more effective than just posting the presentation prerecorded and is severely lacking in any social aspect. Other attendees are names on a list and perhaps an occasional chat comment. Webinars are also visually dull (especially if the presenter is not skilled in slide design) and offer little interaction for the audience. One is easily pulled out of the moment, distracted, bored. I’ve never managed to sit still and attentive through a whole webinar. At the least, a live conference offers people to talk to before and after the presentation and people to look at during the event itself.

Participating in the Second Life conference was very different than any previous experience I’ve had with virtual presentations. A presentation in a virtual world allows for the same slides and audio presentation with chat commentary (equally prone to many of the failures of webinars), but it also opens up other opportunities. First of all, it’s more visually engaging and socially immersive. With more visual interest and movement–and unlike every webinar I’ve attended–I remained engaged by the presentations in Second Life. The virtual world also gave me a greater sense of the presence of other attendees. They were more than names on a list. They took up space. This alone improved the experience, but the medium provided an extra bonus of social interaction. I could chat (publicly or privately) with other attendees before and after the main presentation. Sure, it wasn’t like hanging out at the hotel bar with a bunch of colleagues, but it was better than nothing.

Some might object to virtual conference participation based on the technical and training requirements. Attendees need fairly modern computers, there’s no way around that. But considering how much it can cost to go to “real life” conferences, the cost is not prohibitive (I could buy a compatible computer for the price of a plane ticket across the country, and I could re-use it many times). This won’t open up opportunities for those lacking technology or money for technology.

Virtual world use also requires training. I’m not an active video game player. I had an Atari and a Commodore 64 when I was a kid (that dates me somehow), but never got further along than that. Since then my game playing has been sporadic and social. I had to learn Second Life for my presentation–my first experience with a virtual world and I was going to be standing in front of an audience trying to talk and advance slides. However, I found it surprisingly easy to make an avatar, dress him up, and get used to moving/looking around the environment. Admittedly, I’m good at picking up these things, clicking around and inferring what different options will do, but I did this primarily on my own (I did get training for doing the actual presentation and slides). With a little bit of training (and that would have to be part of any virtual world conference), most computer literate users could pick up enough to attend a presentation (if not necessarily have a great looking avatar).

Virtual world presentations open up a space for synchronous interaction at a distance. A great potential here would be micro-groups dedicated to librarianship, bringing together scattered librarians with common niche interests. For instance, I’d be interested in a small conference with librarians working at integrating their libraries into a Blackboard environment or a small conference about comics in libraries.

Library Camps are a good example of unconferences which have become ever more numerous over the past couple of years. In the fall of 2006 I attended Library Camp East, hosted by the fine people at the Darien Public Library in Darien, CT. The event was a one-day, informal gathering of a few dozen people. We met in the morning, brainstormed ideas for discussion, and created a multi-track schedule for the day. The discussions were informal and without any pre-planning, covering topics such as mash-ups, web design, and communication between techies and non-techies.

The unconference offers an agility not found in a formal conference. Attendees make the decisions of what the discussion topics will be, allowing for not only a greater sense of participation (how very 2.0) but also a greater chance of currency. The smaller nature of these conferences means they can be put on for less money, offering a cheaper (or free) alternative for budget-strapped libraries/ians. Localized, one-day conferences would obviate much of the expense of travel and lodging associated with conferences. These types of events also enable attendees to network on a local level, building social relations amongst librarians which could lead to further collaboration and sharing.

My primary personal disappointment with the unconference I attended was a result of the conference’s form. The topics decided upon by the group, on the day of the conference, ended up being mostly not of interest to me, and the time spent deciding upon topics ate up too much of the day. My unconference improvement suggestion is to start the conference online prior to the event. If attendees start planning the schedule collectively online, not only would time be saved at the event itself, but attendees might spend more time in consideration of topics and organizing the conference schedule. Knowing some part of the schedule might also attract more attendees because it would eliminate fear of the unknown and potentially attract those who specialize in the pre-selected topics–attendees who could help facilitate discussions and provide a richer experience for everyone involved.

Both these alternative types of conference can fulfill the continuing education function of conferences without much argument. The socializing and networking function is less sure in a virtual world but is undeniable at an unconference. People are increasingly accustomed to making friends online. Communities grow around message boards, listservs, Twitter, Facebook, and other social tools. The idea of a virtual world conference starting some kind of deeper social connection between participants is not that unusual. Sure, we may feel we know someone better after spending a few hours with them at the hotel bar, but a virtual connection can become just as ‘real’. After all, when the conference is over, we go back home and connect with our new conference friends on our virtual social networks, don’t we? The major part of this blog was planned virtually after a few brief connections at ALA Annual this summer.

So, this post is a call to action, or maybe just a call to continued action. Let’s find ways to increase our continuing education and networking outside of the large annual conferences. Unconferences have been popular, and I’m going to start making plans for an unconference in my area (Philadelphia area librarians, let me know if you’re interested in either helping with planning, have a location, or just want to attend). So far, virtual world conferences have seemed to focus on virtual worlds themselves (like the recently announced “ALA SLymposium on virtual worlds and libraries in Second Life”), but the potential is there for an increase in more varied events.

Thanks to Lianne Hartman, for editing services and coming up with the title, and to Emily Ford, Erin Dorney, Brett Bonfield, and Ellie Collier for comments and edits.